The Alberta Serious Incident Response Team is investigating a fatal officer-involved shooting that happened in south Edmonton on Tuesday night.

Just before 9:40 p.m., Edmonton police were called to a hotel in the area of 53 Avenue and Calgary Trail.

Police said in a news release Wednesday morning that it was reported to them that a man was damaging vehicles and shooting a firearm in the parking lot.

The suspect ran off on foot and was located by tactical officers about 10 minutes later in the area of Gateway Boulevard and 54 Avenue.

Police said tactical members got out of their vehicle and “engaged the suspect,” who once again fled on foot.

It’s not known how many shots were fired.

EMS attended to the suspect but he was declared dead, according to police.

Police said a firearm was located at the scene. No police officers were injured in the shooting.

Stuart Baron was staying at the Ramada Hotel Tuesday night with his family. He said his room was on the second floor, overlooking the parking lot.

“I could hear a big bang and that’s when I came outside to check on the car and grab some extra diapers,” he said.

While he was in the parking lot, he said a man who appeared to be agitated walked by and stopped to talk to him.

“He just kind of walked by and he was talking to me briefly for a minute, asking me if I was alright, if everything is good,” Baron said.

“I realized what was going on afterwards. I was a little bit alarmed because we’re on vacation with my family and I’ve got four young children.”

Baron said the hotel was locked up.

“The staff was fantastic. They were taking care of everybody’s safety, making sure that the place was secure and doing everything they could do.”

Baron was unaware the man was shot until learning about it Wednesday morning.

“I didn’t even know. Wow, I’m completely shocked by that,” Baron said. “That’s kind of alarming.”

The EPS said it would not comment further on the incident. ASIRT took to Twitter Wednesday morning to say it was investigating. 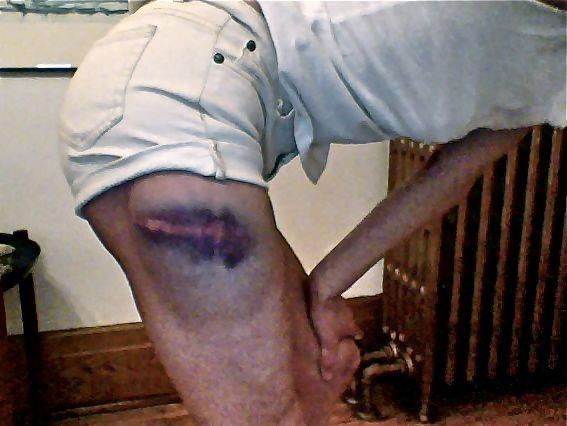 Felled by an abdominal punch from the left and (as this photograph attests) a billy bat from the right, the SPVM said that if I did not not get up and walk away immediately, I would be under the threat of arrest. "Officer", I said, "I think I have already, just now, been 'arrested"; this makes it...
Read more